This completely remodeled open concept home in the highly sought after Sugar Creek neighborhood is filled with natural light and high ceilings. It features 4 bedrooms and...

MAKE AN APPOINTMENT TODAY, THIS ONE WILL NOT LAST LONG, SELLER HAS PRICED THIS BANK OWNED HOME TO SELL FAST. BEAUTIFUL POOL AND SPA ON A LARGE CUL DE SAC LOT. GOOD SIZE T...

ABSOLUTELY BEAUTIFUL, NICE AND CLEAN, ONE STORY,. DRAMATIC FOYER ENTRANCE WITH FORMAL DINING,STUDY CAN BE USED AS FORMAL LIVING ON THE RIGHT. HUGE LIVING ROOM OVERLOOKING...

THIS IS IT! THE PERFECT HOME FOR YOUR FAMILY. BEAUTIFULLY UPDATED AND METICULOUSLY MAINTAINED. GRAND ENTRY WITH TILE INLAY, CHANDELIER, AND SOARING CEILINGS! LARGE ROOM I...

Great opportunity to own a home that is centrally located. Needs work and updating. Being sold as is. Possibilities for this home are endless with an additional 2 car gar...

Must SEE. PRICE REDUCED with lot of upgrades for this property. Contemporary, Elegant D R Horton house with 4 bedrooms, 3 FULL bathrooms and 1 Half restroom. NEW roof 202...

GREAT 3/2.5/2 HOME IN THE MOST SOUGHT OUT AREA OF STAFFORD WITH THE LOWEST TAXES IN THE CITY. THE HOME HAS TILE THROUGH OUT THE DOWNSTAIRS, UPDATE KITCHEN CABINET AND COU...

Come check out this beautiful home! Plenty of space for your family with 4 bedrooms and plenty of living space, all with a large yard and no back neighbors! Laminate and ...

Well kept home in the City of Stafford. Plenty of space for your family and guests. Recently upgraded kitchen, master bathroom, and downstairs flooring. Roof and siding u... 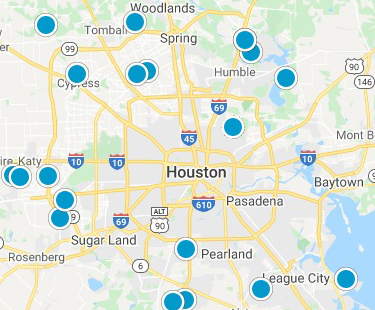